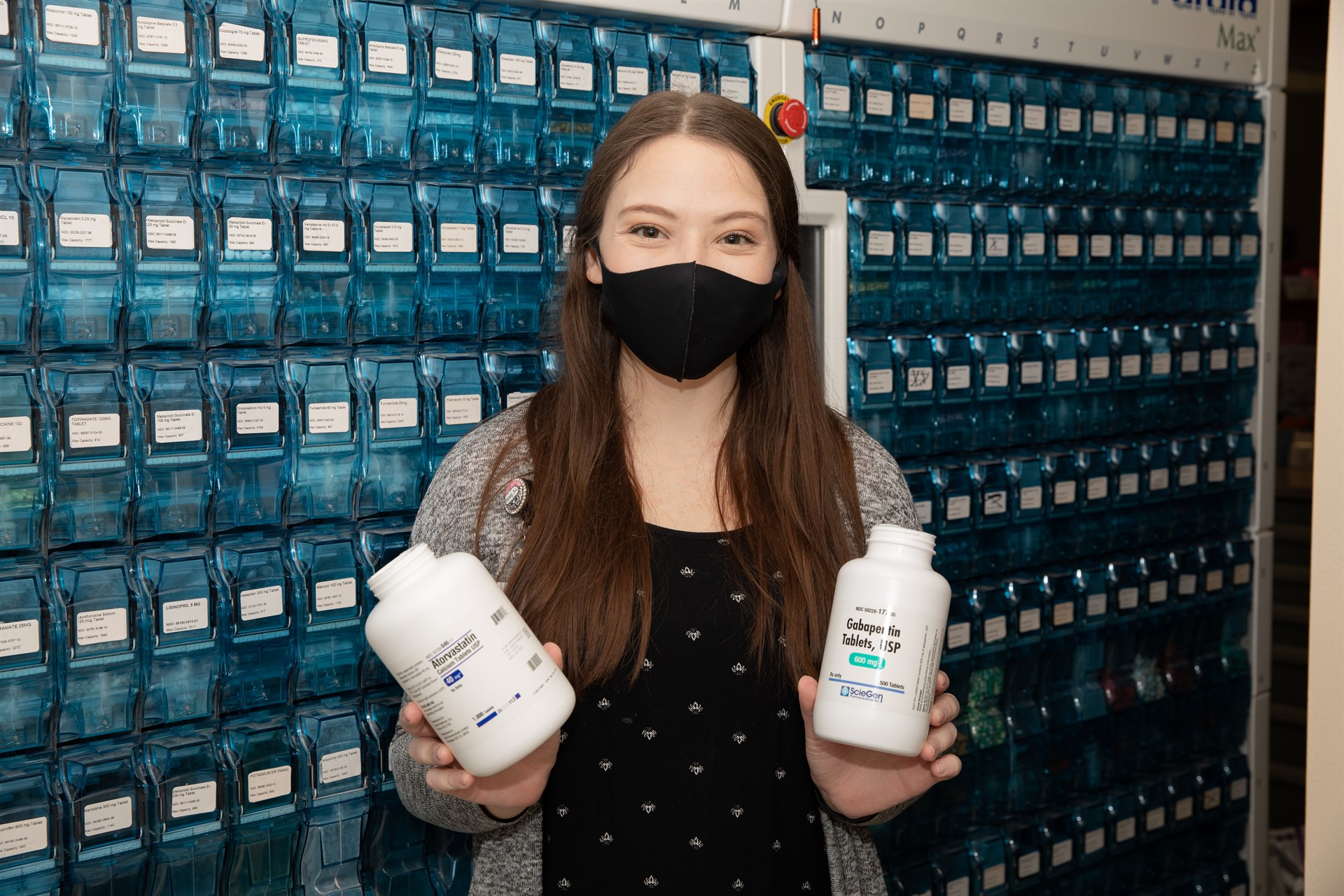 Sidney Health Center Clinic Pharmacy employee, Alex Wicks, was recently recognized with an Employee Shout Out for making a difference in pharmacy.

Clinic Pharmacy Supervisor, Lynn Beyerle, stated, “Alex works per diem when she is home from college, but she always tries to make things better in the pharmacy when she is here.”

Alex has a passion for the environment and recycling. During her shifts, she was sad to see all the stock prescription bottles that were thrown in the trash.

“I’ve always been passionate about recycling, especially at home, wanting to do my best to reduce my carbon footprint.” stated Alex.  “I noticed how many plastic bottles were ending up in the pharmacy trash, so I approached Lynn about possibly starting a recycling program.”

After pitching the idea to her supervisor, Alex was given the green light to check with Richland Opportunities Inc. (ROI) and further discuss her idea with the Pharmacy Director, Roland Achenjang.

She started by calling ROI to verify that they take #2 plastics for recycling, which includes most the bottles at the pharmacy. She followed up by making arrangements with the ROI driver to help collect the bottles on a scheduled basis. Finally, she worked internally between Environmental Services and the Pharmacy staff to ensure a system was in place to make the program sustainable.

“I wanted to get as much information as possible before presenting the plan to Roland.  Having all of the details in place helped with buy-in and made the process go much quicker,” said Alex.  “We had fantastic buy-in from all areas. ROI already comes to Sidney Health Center to pick up cardboard, so they were more than happy to grab the plastic bottles at the same time.  The Environmental Services staff was also pleased because it meant less garbage for them to store.  Lastly, Roland, Lynn and the rest of the pharmacy staff were willing to recycle the bottles that they could.”

“Alex took on the whole project, which involved coordination with multiple Sidney Health Center departments and ROI, who were all very helpful.  We are now recycling all the #2 plastic in the pharmacy, which amounts to about half the trash we generate,” stated Beyerle.

Thanks to Pharmacy and Environmental Services staff, the recycling project is working smoothly.  The plastic is bagged and put in the cardboard recycling bin and ROI picks it up along with the cardboard they were already collecting from Sidney Health Center.

“I’m really proud of what’s happening and really excited about how much we are recycling,” stated Alex.  “It started with an idea on a Monday, and by Tuesday the first pickup was taking place.”

While it may be easier to recycle in more urban areas, there is plenty of opportunity to recycle in Eastern Montana and specifically Sidney.  ROI has recycling containers to collect newspapers, cardboard and #2 plastic and Border Steel & Recycling, Inc. buys scrap metal for recycling.  More details about their program can be found on their website at www.bordersteelandrecycling.com/metal-recycling.

“I hope what we’ve done inspires others to take advantage of the resources in our area and look at what they can recycle,” said Alex.

Alex is from Fairview, Montana, and is currently a student at the University of Montana.  She will graduate this fall with a bachelor’s degree in political science.  She plans to attend law school following graduation.